Du er her: Forside. / Less weight helps Tove getting through the day

Tove Nedergaard has lost 25 kilos – thanks to many walks made possible by means of the Align Footwear insoles in all her footwear…
Life itself has changed considerably for 64-year-old Tove Nedergaard. She used to spend her time on the couch, nearly paralysed by serious back pain. Ordinary everyday tasks as cooking og vacuum cleaning in her house in a small Danish village were almost impossible and resulted in so much pain.

However, today Tove prepare dinner, she vacuum cleans and polish the windows in the house without any difficulties – AND furthermore, in-between these domestic chores, she will go for many walks. The back pain, which caused her so many difficult days and resulted in early retirement, is almost gone! The explanation? A new situation inside her footwear – namely the Align Footwear insoles.

When Tove started wearing these insoles, she experienced much less pain in her back which again resulted in the capability to go out for long walks every day. It can now be clearly seen on her weight – she has lost 25 kilos thanks to the many walks and the decision to maintain a sugar free diet.
The insoles have played a very important part in her well-being and weight loss.

“They have resulted in the fact that I may now go for walks wherever and whenever I wish to. I may now park the car in one street and go for longer walks without any pain as well as picking up the grandchildren and go shopping without any problems at all”, Tove says. And especially the fact that she may now enjoy the days and walks together with her grandchildren makes her extremely happy. “I can now do whatever I want to – and even take the grandchildren on a picnic”, she smiles.
And the back pain is history. “I might feel a little pain once in a while, however, not at all as much as I used to for so many years… the weight loss also helps of course”, Tove explains. 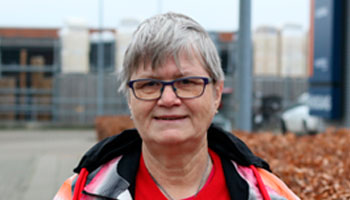